A range of clothing available to members embroidered with the club logo. Also, car badges for grille or bumper bar mounting.

The Club organises various activities through the spring, summer and autumn, comprising road runs, weekends away and attendance at classic car shows.

The Club organises various activities through the spring, summer and autumn, comprising road runs, weekends away and attendance at classic car shows. For more information, click or tap on the photo.

For details of offers on classic car insurance, suppliers providing servicing/repairs/parts, and cars and spares for sale, please click or tap on the photo. The Club also offers a range of regalia, bumper badges, etc. 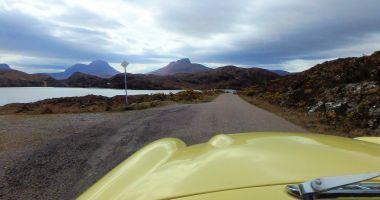 Why not join us and have some MG fun?!! All MG enthusiasts of models both old and modern are very welcome.

What We Offer - please scroll down the page for more information.

We organise a variety of club activities, obviously centring around the use and enjoyment of our MGs. Our members have cars representing most periods of MG production from T-types, MGAs, MGBs through to the last MG Rover models, the modern MGF and MG TF. One of our members has a turbo-charged MGB GT, an interesting modification which he carried out himself many years ago; another, who is the proud owner of a very smart MGC GT (see below), started his business career in 1967 as a Student Apprentice at Jaguar Cars' Browns Lane factory in Coventry.

New members to the Club are always welcome. Why not join us? It would be great to see you!

Our Year Book, Highland Motoring, is e-mailed out to members towards the end of each year.

We have regular club runs throughout the Spring, Summer and early Autumn. These take us to all parts of the Highlands, north, south, east and west. Trips to date have included a visit to Applecross via the famous Bealach na Ba (Pass of the Cattle), the highest road in Britain, a circumnavigation of the Cairngorms, Sunday lunches in Gairloch, Lossiemouth, Kinlochewe and Aviemore, to name but a few. The photo below shows a group of members at the car park to the Neil Gunn memorial at Strathpeffer, on part of a Club run around the Black Isle.

Another stop was made at the Neil Gunn memorial in September 2019 when we had a very enjoyable and fairly informal outing for lunch at the excellent Highland Farm Café near Dingwall.

We also participate in "Drive It Day" each April - the photo below was taken in Drumnadrochit on Drive It Day 2013 when the run encompassed a circumnavigation of Loch Ness.

Here are some more members' vehicles participating in Drive It Day in April 2019.

The photo above shows a 1952 MG TD in the foreground. Below is a view of the interior and dashboard.

Produced for a relatively short period between 1953 and 1955, the successor to the TD was the MG TF of which we see an example below.

Note the octagonal instrument dials on the MG TF!

Below we have some photos from the Tain Vintage & Classic Vehicle Rally, firstly in June 2016, starting with a parade of MGs!

Here are two more photos from the Tain Vintage & Classic Vehicle Rally, this time in June 2019.

In July 2019 we had a day trip to Sleat on the Isle of Skye. We all met up at the parking area opposite the old toll booth (now defunct) on the approach to the Skye Bridge where our collection of MGs attracted quite a bit of interest from passing motorists, several of whom stopped to take photos.

During 2019, a day trip was arranged in August to the Macallan Distillery. Here we see members' cars assembled in front of Easter Elchies House.

In addition to Club runs, we also organise weekend trips, these having included stays in Skye, Ardnamurchan, Braemar and Blair Atholl, to name but a few.

In May 2016, an intrepid band of Club members set off on a 4-day trip around the North Coast 500 route, travelling anti-clockwise up the "right-hand side" to John O' Groats (see below), across the top to Durness, and then back down the "left-hand side" via Ullapool and Gairloch.

In April 2019, we had a trip to Killin in Perthshire. The photo below shows members' cars parked at Fortingall.

New members to the Club are always welcome. Why not join us and have some MG fun? It would be great to see you!

If you would like to see more detailed information of the way the Club operates, please view our Constitution.

New members to the Club are always welcome. Why not join us and have some MG fun? It would be great to see you!

The Highland MG Owners' Club is a member of the Federation of British Historic Vehicle Clubs which exists to maintain our freedom to use Yesterday’s Vehicles on Tomorrow’s Roads.

This website is intended to promote the interests of Highland MG Owners' Club. We take every care to ensure that the content is accurate and up to date but cannot accept responsibility for any information which may have changed without our knowledge. If you intend to attend any of the events listed on our website, you are advised to check the details independently with the relevant event organiser(s).